Dang You're Stupid! Changing Your Self-Talk 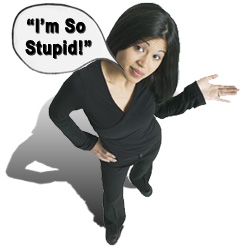 I just had an interesting conversation with a young lady.

I was at a store getting a few things, and as the young lady behind the counter was ringing up the order, she accidentally hit the wrong key, and apparently wiped the entire order out instead of tallying it up.

When she recognized that she did this, she hit the counter in disgust and said, “Dang, I’m so stupid for doing that!”

Of course, you know me; I saw this as a great opportunity to share some wisdom.

I banged on the counter the same way she did, and said “Dang, you’re so stupid for doing that!”

The look on her face went from frustrated and disappointed to a confused and angry look.

She ask, “Why would you say that to me?” I said “I’m just saying the same thing that you said to yourself….”

Her response was “Well, that’s different. YOU can’t go around saying that people are stupid… “I” can say whatever I want to say about myself. It’s just plain ole’ mean to go around telling other people that they’re stupid.”

Of course, this conversation was going down the exact path I wanted it to, because this opened up a great opportunity for learning and sharing with the young lady how powerful her words are.

I explained to her how the things she says to herself are exponentially more powerful than anything anyone else could say about her. However, she gives other people more validity when they are saying things about her.

The point I made was: she obviously didn’t get upset with herself for calling herself stupid, but she did get upset with me for saying the exact same thing. How ironic!

I went on to tell her that continuing to call herself stupid is a very self-defeating and destructive habit; because over time, she’ll start (subconsciously) believing that she’s stupid. And of course, she’ll end up attracting more situations that “proves she’s stupid”.

I told her that, by no means did I really think she was stupid…and that she shouldn’t either.

Be aware of the things you’re saying to yourself, because your word is way more powerful than anything anyone else could say about you.

Be very aware of any self defeating or negative self talk that you may be having about yourself.

Ask yourself “How would I respond if someone else were saying this about me?” The majority of the time, you’ll find that you would be angered or offended by someone else saying those exact things that you’re saying to yourself.

Keep that in mind the next time you come down on yourself for whatever reason.

8 thoughts on “Dang You're Stupid! Changing Your Self-Talk”