Living The Law Of Attraction: Manifesting A MacBook Pro

Okay, so a lot of people have been asking me why I have a Mac emblem on the back of my Dell computer. Well, there’s a couple of reasons:

One is that I want a Mac.

Sorry PC guys….I’m going over to the other side. I’ve been getting so frustrated with going back and forth with the issues and ills of owning a PC. 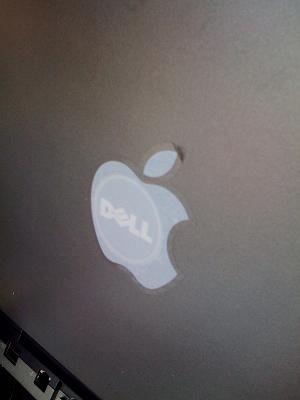 I’ll probably keep my laptop…I’m not just going to throw it in the trash but I’m just at the point now where I’m conceding that the Mac is just by far a better computing system…especially for what I’m doing–podcasting, video stuff and few other things–it’s just a better platform to be on.

From my understanding and from what I’ve seen and heard from other people, Macs just have less problems, less viruses, all that stuff. It’s just one of those things where I’m just really wanting to get into a Mac.

The other reason why I have the Mac emblem there is related but more specifically as it relates to the law of attraction. I want to manifest a brand new Mac book Pro in the next 3 months – for no money at all.

That would be the absolute perfect computer setup for me and What I want to do is to manifest it without paying a dime for it…
So, having the Mac symbol on the back of my dell is just a constant reminder of what it is I’m looking to manifest.

Maybe the computer won’t just show up out of think air, maybe it will. But, I’m not limiting myself to it “magically showing up…I’m also open to the possibility of having an influx of $5,900 above and beyond my regular income. Like some unexpected new projects, or a check from stuff I did months ago…if anything like this occurs, I’ll feel that it’s the answer to my desire.

So for all of you who are wondering why I’m walking around pretending to be a Mac guy, (what this one guy said in Starbucks the other day) that’s what I’m doing. I’m manifesting a new computer for myself! 🙂

14 thoughts on “Living The Law Of Attraction: Manifesting A MacBook Pro”