Law Of Attraction Works All The Time…Unless You're Bugs Bunny

By far, my favorite ‘actor’ in the entire world is Bugs Bunny. I can go on and on about how much depth Bugs has, but that’s in another post…”Bugs For President”.

Anyway, here’s a scene from one of my favorite segments, “High Diving Hare”. Yosemite Sam wants to see “Fearless Freep” the circus high dive act, but Freep couldn’t make it because of weather. 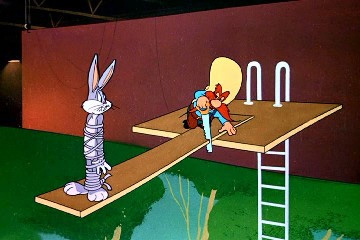 So Sam “tries” to force Bugs to do the high dive act; but Bugs, with his never-ending gags, tricks Sam into jumping off the diving board over and over. 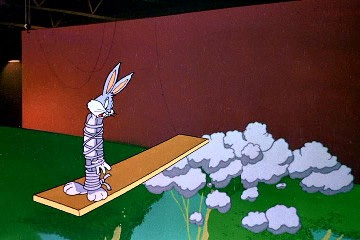 The very last scene is where Sam gets fed up and ties Bugs to the diving board then begins to saw the end off so Bugs would have to fall into the bucket of water. Well, if you know Bugs, he always has a trick up his sleeve.

When Sam finishes sawing the board, the entire diving platform falls to the ground, but Bugs is suspended in mid-air and he recites this famous line “I know that this defies the law of gravity…but, I never studied law!” 🙂 Ha, Ha, Ha What a hoot! I just crack up every time I think about it. 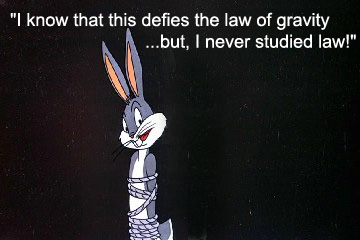 So, what does this have to do with you and the Law Of Attraction…

It doesn’t care if your thoughts are good or bad…it works.

It doesn’t care if you’re rich or poor…it works,

It doesn’t care if you’re male or female…or anything in between…it works.

It doesn’t care if what you’re thinking about is what you actually want or not…it works.

Use the knowledge that LOA isn’t a fickle being that decides whether to reward or punish you based on your temporary behavior.

Know that it works all the time, every time…just like gravity (unless you’re Bugs Bunny)

Bugs Bunny, Yosemite Sam and the images contained in this post are trademarks of Warner Brothers